Peg’s Posts: Garmin loves its customers, they love their Garmins 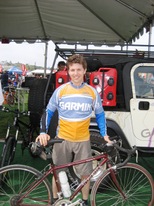 Chris pedaled his way across the U.S., guided by his Garmin GPSMAP 76CS, stopping at schools to talk to kids about healthy hearts, physical fitness and nutrition. His amazing journey was part of an awareness effort for the American Heart Association. How long did it take Chris to bike from Ventura, California, to Loubec, Maine–a distance of 3,746 miles? Exactly 64 days—51 days of riding averaging 70+ miles a day and 13 days of rest. He chose the 76CSx to guide his journey because he needed full mapping, altimeter and the ability to look up and navigate to addresses, restaurants and other destinations. When he stopped at schools to give his presentation, the students were particularly interested in the GPS.

Now, about Chris’s journey. An important detail—he made this trek unassisted, carrying all his provisions in panniers. That’s right—he hauled his house (tent), clothes and other gear every day. Chris blogged his journey with the help of an ultra mobile PC and used the posts as an interactive tool for his presentations. Chris happened to pass through the town of Greensburg, Kansas just hours before a twister blew through and leveled the town. By the time the storm rocked the region of southcentral Kansas, Chris was camped for the night at a small trailer park. Chris said he watched from his tent, terrified, as branches were snapping and lightning flashed around him. Water was gushing into his tent and he was too scared to leave the tent, too scared to stay. Fortunately, no tornadoes touched down in that region. My next question: were there days you wanted to call a buddy to come pick you up and end the journey? Chris’s answer: every day. He had to just keep telling himself that the cause and the people he met were worth it all. Chris spoke to over 6,000 kids and made appearances before state legislatures, mayors and other public officials, spreading awareness of his cause. He’s already planning his next journey and he now has a nonprofit organization. Best of luck on your future journeys, Chris, and thanks for stopping by to share your amazing story.