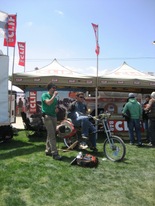 Once the competitive cycling died down, the crowds were ready for a little entertainment. Enter the bike-powered rapper, who invited all with willing legs to hop on and put pedals in motion to power his generator, iPod and speaker system. The rapper was later replaced with a crowd-pleasing bike-powered blender. Enjoying the spectacle with the rest of crowd was the father of mountain biking himself—Gary Fisher. Gary obliged us with a photo opp and listened as one of our regional sales managers told him that he’s been riding an original Gary Fisher mountain bike for 15 years in the Washington state area.

Stay tuned for more Sea Otter coverage and some great stories from customers who stopped by our booth.