A promising weekend at Pocono

Another big weekend for both Garmin sponsored NASCAR drivers– but for one of our drivers, this weekend brings a little something different.  After a solid 13th-place finish last weekend at Dover International in the Craftsman Truck Series, the No. 08 theGPSstore.com / Garmin Chevrolet driver Chad McCumbee, will step out of his truck and and make his first NEXTEL Cup debut.  Chad will be climbing into the drivers seat of the #45 Goody’s Cool Orange Dodge this weekend, as driver Kyle Petty goes into the TNT broadcast booth on Sunday, June 10, at Pocono Raceway. Recognized as one of NASCAR’s most competitive raceways, Chad says it’s definitely been kind to NEXTEL Cup rookies in the past. Chad calls this, "the biggest weekend of my racing life," and we will definitely be cheering him on. Good luck, Chad! 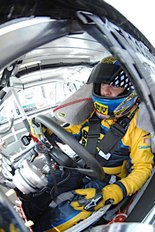 In other NEXTEL Cup news, from a 38th-place starting spot, No. 66 Best Buy / Garmin / Haas CNC driver Jeff Green and team overcame some tough obstacles and brought home a 30th-place finish, five laps down to the race winner, last weekend. With 13 events down and 23 to go, Green has dropped to the 28th spot in the Nextel Cup Series driver’s points standings after the race at Dover. Can Jeff and the guys turn things around this weekend on the anything but ordinary track? We think so!

Make sure you catch Chad and Jeff take on the tight turns and long straightaways at the Pocono 500 this Sunday, beginning at 1:30. Bring home a victory, guys!

The post A promising weekend at Pocono appeared first on Garmin Blog.