A Hopeful Weekend of Firsts

A busy weekend indeed, for both Garmin sponsored NASCAR drivers.  Last Sunday’s NEXTEL CUP Series at the Coca-Cola 600 marked the first time this season the #66 Best Buy Garmin car was not running at the end of the event. But this weekend, we think things are going to change…

The fun starts tonight in the Craftsman Truck Series at the Dover International Speedway, as #08 thegpsstore.com Garmin driver Chad McCumbee will try to maintain his momentum.  Chad and team will be taking a brand new truck to Dover this weekend, and are hoping to bring home their first win of the season. Good luck Chad, we wish you the very best tonight! 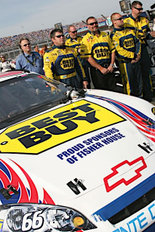 Keeping up with the excitement, Sunday’s race in the NEXTEL Cup Series, will be the first of the season at the Dover International Speedway, where #66 Best Buy Garmin driver Jeff Green, will take on the lightning-fast track of the "Monster Mile," at the Dover 400.  According to the guys at Fox Sport News, "If you’re looking for a safe Top 25 play this weekend, Green in your driver." In a Q & A session on JeffGreen.com, Jeff commented that, "You may not necessarily have the best car, but it’s what you can do with what you have that separates the great drivers from the rest of the pack." Well good luck on Sunday, Jeff.  We’re cheering for you!

We also want to mention Jeff’s participation in the NASCAR Foundation Track Walk at the Dover International Speedway on Saturday, June 2, along side fellow NEXTEL Cup drivers, to raise money for various charities including the Green Foundation. What a great cause!

The post A Hopeful Weekend of Firsts appeared first on Garmin Blog.