Twice the splash in Business 2.0 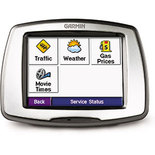 There are a lot of great Garmin finds in this month’s issue of Business 2.0 that recently hit stands. Not only did the Garmin StreetPilot c580 receive rave reviews as a portable GPS device pick, but Garmin co-founder and CEO, Min Kao, was recognized as one of the "50 Who Matter Now: the most influential people in the tech-biz — and what you can learn from them." Among some pretty impressive company, Garmin was applauded for its vertically integrated "design, manufacturing, inventory, distribution, and customer service and for grabbing more than 50 percent of the U.S. market."

In the "Cool Gear Field Test," the c580 was put up against some of our biggest competitors. Receiving 3 1/2 of the 4 stars, the B 2.0 crew liked the Garmin for its simple "Where to?" and "View Map" interface, as well as the Bluetooth capability and MSN Direct options, too. These features, among others, make the StreetPilot c580 a stellar choice for easy navigation, anywhere you go. To check out more of "The 50 Who Matter Now," and to see why the SP c580 was a top pick for B 2.0, take a look at the Active Magazine, here. "The 50 Who Matter Now" article starts on page 57, and the Field Test can be found on page 98.

The post Twice the splash in Business 2.0 appeared first on Garmin Blog.