The Rose Brooks Triathlon — presented by Garmin and managed by Blue Hills Adventures LLC — was the first all-women’s triathlon for the Kansas City area. Proceeds from the race benefited the Rose Brooks Center, a comprehensive domestic violence prevention agency. The goal of the event was to encourage and empower women. From the cheers, hugs and comments heard after the event, it was clear that the race did just that.

An overcast sky and lower temps were a welcome relief for the athletes. The weather, combined with a good course and women who’d obviously trained hard, added up to some swift finish times. The top three ladies finished the sprint distance course (500 meter swim, 10 mile bike, 5k run) with times of 1:02:14, 1:02:28 and 1:03:44.
Participant Molly D. knocked 10 minutes off her PR at the Rose Books Tri, which was her sixth triathlon. Better yet, she got her friend Kelly F. to compete for the first time. Kelly said this race appealed to her because it was all-women and it was open to novices. “Also, I turned 40 this year, and though I’ve run marathons, I needed a new challenge.” Kelly was also overheard telling her husband she needed one of those Garmin Forerunners. Time to take the training to the next level. 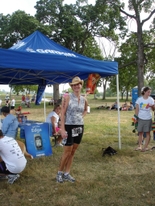 Sherry Y., from Kansas City, said this was her third triathlon and the most fun one yet. “The other women competing were so supportive,” Sherry said. “You couldn’t pass someone without her yelling, ‘you go, girl.’” 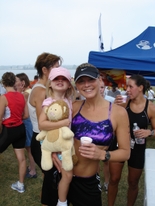 Fan support — from spouses, children and friends — was a big part of this race. One mom said there’s nothing more motivating than hearing her daughter yell “Go mommy, go!”

There was even a cheer of “Go, grandma!” as one participant climbed on her bike and headed out of the transition area. This woman’s daughter happened to be competing as well. As grandma crossed the finish line, all smiles and arms raised, I noted the slogan on her shirt, “Goddess of victory.” Beautiful.

Another cool mother + daughters connection was a family from West Plains, Missouri. Mom Cindy said she learned about the race after doing an adventure race put on by Blue Hills Adventures. “It was such a good race and so well-organized that I decided to do another one with my girls. I told them we needed to put our swimming pool on our farm to good use.” Daughters Katy, 18, and Audie, 16, took to training with mom and it paid off (note the medals around their necks, which they received for placing among the top 3 in their age groups). Katy said it was really encouraging to have the volunteers and spectators cheering them on during the race. Both girls are already asking Cindy when they can do another one.

Thanks to all the ladies who came out to “tri”, to their fans, the race sponsors and an incredible group of volunteers. Hope we can do it again next year. To view race results, go to www.rbtri.com.