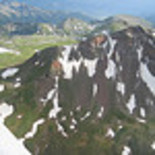 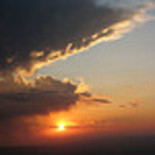 I’m headed to some higher elevations over the next several days. Destination: Winter Park, Colorado for some R&R&R (rest, relaxation and recreation). You can bet we’ll have Garmin gear all the way. c550 to get us there and all around, Forerunner 305 for runs and mountain biking and the 60CSx for any hiking/geocaching pursuits. Don’t forget to submit your own vaca stories and photos to Garmin’s Big Summer Adventure contest. You could be traveling in style next season with your own nüvi 200! Photos compliments of a couple of my coworkers who recently took a trip out west in training for their upcoming half marathon up Pikes Peak. Read on for an update on their training.

Race to the top 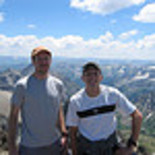 Checked in with my associates here at Garmin who are training for the Pikes Peak Ascent on Aug. 18 and are using Forerunner and MotionBased to track their training. Here’s a photo of Jim and Shane on a recent hiking trip they took to Colorado. They worked in a little altitude training while there. Back on the plains, Shane, Jim and another coworker, Steve, say they’ve not been logging the mileage they’d like to, but the hot, humid weather of late is a factor. Shane and Jim have been doing some stair workouts to get their legs in shape for the act of running up, up, up. Our 8-story building provides ample stairs for their workouts.

Steve is the veteran of the bunch (this will be his 12th time at it), and he has a way to beat the Midwest heat. He’s cut his running back to 20 miles a week and he’s logging more miles on the bike — about 100 miles a week — for cross training. That’ll put Steve in great shape for competition this weekend at the Prairie Punisher duathlon, where he’ll do a 15k run, 60k bike and then a final 5k run. Steve uses the Forerunner 305 for his running and cycling training. The multisport version is perfect of duathletes like Steve because you can swap it from wrist to bike in seconds. Check out Steve’s activity digest in MotionBased.

Here’s what Steve had to say about his training with Forerunner: When I use the Forerunner on the bike, I motivate myself by setting the Forerunner to display average speed and then try to stay above 20 mph. I’ve been adding a few miles onto my regular loop at the weekend, and it’s good to be able to look back at the map and see where I’ve been and how I can add to the loop the next time I go out. I was impressed when I started to turn onto a road that I then realized was gravel and turned back (maybe 10 yards or so) that I could see the deviation plotted on the map after logging with MotionBased, so I know it’s very accurate. For the running, particularly when it’s warm and humid, I set Forerunner to display heart rate and distance. Looking back at data from my workouts, I’ve determined that it is OK for me to run 30 seconds per mile slower than what I would run on a 60 degree low-humidity day.