Today we feature another rider for Team Garmin — one of four cyclists who are training for June’s Ride the Rockies through Colorado.  They’re using the Garmin Edge and MotionBased.com to train for the highs and lows of this grueling event.  We’ve already introduced Daren and Kris… today it’s Patty’s turn: 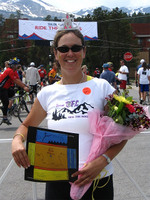 I was never athletic. Although I’m 5’9″ and 135ish, I was always the short, fat one in my family. Really. And I was so uncoordinated I was in a remedial gym class. Really. I’d come home from school, snack and watch TV. College was in Wisconsin so my idea of exercising was running down the street to a party with no coat on in 20 degree weather. Needless to say I gained my freshman 15. At age 25, though, I realized my 70+ year old Dad had a much lower resting heart rate than I did. He played tennis or jogged most days of the week. Motivated, I joined a gym and worked out regularly, but I never tracked or monitored my progress. I doubt I made much.

At 31, I trained for and completed a triathlon, a little longer than sprint length. That felt great. I never did work too much on time, just wanted to finish. The cycling was the only part I really wanted to continue doing. A great bike on long-term loan made that possible, but the max I ever rode was about 30 miles. From home near downtown Denver, along the Cherry Creek Trail, around the Cherry Creek Reservoir and back. I felt pretty good if I did that. Actually, I felt I deserved (and needed) a nap.

In late February of 2005, Kris called. “Kravitz,” she said, “Ride the Rockies. You want to do this. You have two days to decide.” Kris is pretty direct. I’d heard of Ride the Rockies, even been interested, but I never thought I could just DO it. Kris has just done it for nearly 20 years. But uncoordinated, out of shape ME? Still, I was looking for a challenge and needed to get back into shape in the midst of my winter blahs (and blobs). The next morning, I woke up at 5:30. Unable to fall back to sleep, I got up and pulled on some shorts. Up to the work out room in my building. I got on the bike. Felt pretty good. Did it the next day. Called Kris and told her I was in.

I trained as best I could. Despite promises to train with me, Kris was never available so I took it upon myself. On the stationary bike until it warmed enough to ride outside. Mostly I was by myself on the trails around Denver. I was afraid of a bike computer, so I was never exactly sure how far or how fast I went. I hoped it was enough. Just before I turned 35 I completed my first RTR.

It won’t be my last. But this year the training will be different. I’m ready to know how fast, how far and how hard I’m going. This year won’t be about just finishing, it’ll be about being in the best shape of my life.