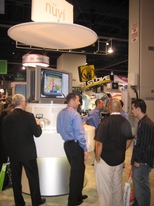 Last Monday, we were rubbing elbows with more than 150,000 of our closest tech friends for day one of the Consumer Electronic Show. Now, one week later, our efforts to bring you the latest, greatest and ultra-cool navigation devices, have proved victorious. While much of the conversation in booth #35832 was around – or should I say with – the nuvi 880 with speech recognition, it’s no wonder the 880 was a finalist for the Best of CES People’s Voice Award. Before we had a chance to let that honor sink in, the 880 was also named Best of CES GPS Navigator from Laptop Magazine. But the nuvi 880 didn’t steal the spotlight the entire week. In fact, the Colorado 400 series also scored an Editor’s Choice Award from Popular Mechanics, and has since continued to be the topic of conversation among many outdoor enthusiasts.

So it’s back to work for us here at the office – there are many exciting Garmin projects around the corner. And when we can, we’ve already started to rest up for next year’s CES festivities. I can speak for myself when I say that, the earlier you start, the better! Thanks to everyone who stopped by the Garmin booth this year – it was a great, jam-packed week full of new products and Garmin innovations. We’ll see you next January!