I posted a few weeks ago about my impending attempt at defending my Urban Photo Safari crown and I am here to tell you that I prevailed again. I know, I couldn’t even believe it myself, but what can I say?  Other than maybe…that I got lucky. Click here to see my winning photo!

One of the cool things though, is that one of the contestants was smart enough to take a Forerunner 305 with him on his safari. You can see his track log below. Also, he used GPSTagr.com to geocode the pictures he took by comparing his GPS tracklog to the timestamps on the images.

Then he uploaded them to Flickr so you can see the images, and see where they were taken.  I definitely think that’s one of the coolest things I have seen short of connecting a Nikon Camera to a GPS and geocoding them that way.

Click on the image below to see his track log in MotionBased. And stay tuned as I fight to keep my reining crown again next year! 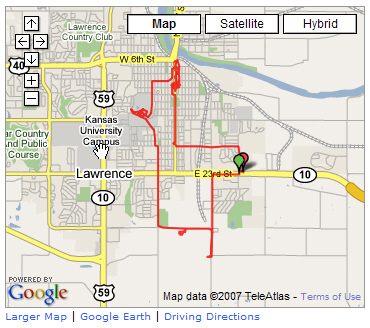