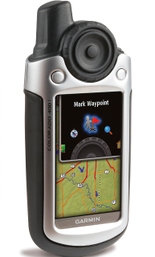 "You get to investigate the fire and see it in real life," John explains about his Arizona adventure. "Staying a safe distance away of course. I left an empty (and cleaned out) lighter fluid container for the cacher to find as real life evidence and experience which is then virtually added to your inventory."

Our first of two runner-up entries is called Henry Hudson’s Hidden Treasure. "You start at the Henry Hudson park in Selkirk, NY, and you are guided by the spirit of Henry Hudson and he guides you in the direction of his hidden treasure," wrote Travis Dodson. "You stop at different signs at the park and are asked to answer questions and when they are answered correctly a new zone will open up and eventually it will lead you to the final which is an ammo can (hidden treasure) with the basic Geocaching swag." Thanks, Travis, we love anything that tests your brain and rewards you with free stuff.

Finally, Tim takes us on An Amaze-ing Adventure. "The players are led into a virtual maze with the reward of an exceptionally large cache at the end," Tim explains. "The people who have played it thus far have reported spending around 2 hours trying to navigate the maze."