0
Home Garmin Blog Weekly Winners: You Take Us There, Week 11

Weekly Winners: You Take Us There, Week 11

I’ve used the Garmin eTrex for about 3 years.  Last fall the unit fell
out of my pocket while in the field.  At the time, I had 46 waypoints
stored in the unit (test pit locations).  The field was overgrown grass
and weeds, and after search for it for an hour, we gave it up for
lost.  About five months later, following winter (northern missouri)
and a grass fire, the unit was found in the field.  The person who
found it pushed the on button, and was amazed to see a flickering in
the display.  I picked up the unit about a month later and brought it
back to my office.  As the crystal was warped, I removed the back and
cover, recharged the batteries, turned the unit on, and was actually
able to download all 46 points.  I’m not sure whether I’d advertise the
unit as proof against grass fires, but at least this unit made it.  I’m
currently using a GPSMAP 76CS, mostly for the additional storage.  I
also have a carry case.

We went on a backpacking trip through the Diamond Peak wilderness area near Willamette Pass, Oregon this July. I brought the Garmin Forerunner 305 that I purchased just a few weeks before. I preloaded several points where we might camp each night just for fun.  The first day started off very well until we passed the first lake about 5 miles in. We encountered more mosquitoes over the next 3.5 miles that day than I had seen in my life up to that point. We were sprinting through the marshy areas to avoid these bugs. We quickly lost the trail and had to rely on the points I entered in the Forerunner for fun to find our way to a camping spot for that night.  The bugs lightened up a little bit after that point, but not nearly enough to make the trip pleasant. If we didn’t have that watch we might still be wandering in the woods being consumed by bugs. Here is our track. This is a picture on a small snowy spot was the only place we didn’t have mosquitos for the entire 3 days. My comrades took their mosquito nets off. I, however, was not that trusting.

I purchased my GPSMAP 60Cx to replace an old yellow eTrex that I had lost when I evacuated for hurricane Rita in the fall of 2005.

When it came time to get a new GPS I wanted to get one with a few more bells and whistles so I chose the 60Cx.  I planned to use it for geocaching and camping with my family, but have found even greater use and enjoyment from it for using the auto-routing capabilities when navigating an unfamiliar area.  It’s especially helpful when using it to find directions to restaurants and places of interest when traveling.

On a recent camping trip I was able to do a little geocaching on the trip to the park and while we were there.  Attached is a photo of my son and his friend at Enchanted Rock State Park in central Texas.  Using the find feature, we were even able to find the closest Dairy Queen on the way back home (and in 100 degree heat, a little ice cream is a welcome treat.)  What a fun tool.

An eTrex and a Machete

I went to Kenya earlier this year on a mission trip. We stayed with a
missionary who was located about 90 miles outside of Nairobi in the
African bush, where the Maasai live. I had just gotten a new eTrex Vista
for Christmas and was eager to put it to the test. The trip leader was
a close friend and has been my running partner for a number of years.
The area was quite pretty and was much like being on a safari. We knew
we would have to get in a run while we were there, so we decided to use
the eTrex to help us. One morning on our way to a small village about
25km away, we tracked our route and set a waypoint about 10km from the
missionary compound. On our return trip that afternoon, we jumped off
the truck at the waypoint and used the eTrex on our run back to the
compound. We did carry a machete as well as the eTrex, because you just
never know what you might run into. Fortunately for us, the only thing
we ran into was a Maasai, who joined in and ran a few kilometers with
us until he went his way. We ended up not needing the machete, but the
eTrex definitely earned its keep. 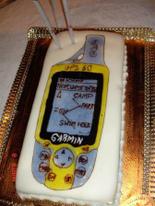 We were at our friend’s birthday party some weeks ago and his wife ordered a birthday cake that you should probably enjoy. That’s the GPS that our friend Victor would like to have. We’re a bunch of friends that enjoy geocaching.

The post Weekly Winners: You Take Us There, Week 11 appeared first on Garmin Blog.