First cyclist to score a jersey was Chris, from Orange County, Cali. He was prepping to ride in the intermediate class for mountain biking. He’s had the Edge for about 11 months and in that time has logged 4,000 miles. I think that’s more than I drive my vehicle in a year. Chris said the Edge is like no other training tool he’s used. “You can track what you’re doing and how you’re performing at any point in a ride and compare past performance. I can look back and see that I did a course in X amount of time two months ago and compare it to my performance now.” He also likes the dot racing feature in MotionBased so he can compare his performance from an activity to another rider and see exactly where he’s losing or gaining on him. 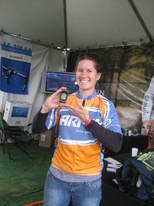 Here’s Jessie May who came to Sea Otter to race in the women’s expert category for single speed. She’s had her Edge for three weeks — a gift from her boyfriend, who’s been training with the Edge for several months. Jessie said so far in her training, she’s been using the heart rate function to monitor her intensity and regulate her breathing. She can set up her display to show her current heart rate and heart rate zone, allowing her to constantly monitor her status and make sure she’s not going out too hard and to know when she can kick her intensity up a notch. We hope Jessie enjoys her new Edge and the jersey. And if your boyfriend wants a jersey to match, he can get one here!

And then there were the brothers, Troy and Tim, from West Palm Beach, Florida, where the weather allows them to ride pretty much year-round. And it sounds like they do. They’ve both had the Edge for a year and profess they can’t ride without it. “I use the Edge at least five times a week,” Tim said. “I use it for interval training and I use it on both my mountain bike and my road bike. Just clip in on the mount and go.” Troy said he likes being able to monitor heart rate and cadence. “I put the heart rate on full screen so I can see it at a glance during a race. After a race, I look at my max and know if I could’ve pushed it a little more. Or I look at cadence and if it was a little high, I know I need more power there next time.” Racing is a family affair for these guys and their sons (Troy has 2, Tim has 1). They travel all over the southeast for races, using Garmin nav for guidance. After a race, they’ll head home and use StreetPilot to look up a pizza place along the way and call ahead to order. Twenty minutes later, they arrive and dinner’s ready so they can eat and be back on the road in no time!