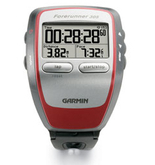 While Jake is hard at work at CES playing show-and-tell with our new Forerunner 405, there are plenty of fitness fanatics using and loving their Forerunner 305. And while the Forerunner 305 monitors everything from elevation and pace to distance and speed, it also moonlights as a GPS navigator – allowing runners to view paths on maps, save locations and even find their way home. And when you’re running on a frozen lake, maintaining your sense of direction is quite important as this Garmin user and blogger recently found out.

“After a few steps, though, I decided to give the map functionality on my new  watch a try. It is a Garmin Forerunner 305. I haven’t had it long, so I don’t know all of the cool things you can do with it yet. I mostly use it for mapping my runs after the fact. It turns out that I was going in the right direction and would soon have gotten to a spot of open water that I would have remembered running around on the ice. “

So if one of your New Year’s resolutions is to pound more pavement or tackle more trails in 2008, the Forerunner 305 is perfect for leading you in the right direction!