Richmond plays home state to Sadler and No. 19 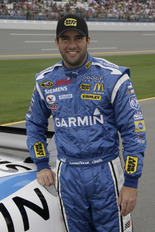 It’s home sweet home for Elliott Sadler this weekend. The Sprint Cup Series heads to the Richmond International Raceway for the Crown Royal 400 where Elliott and the No. 19 Stanley Tools Dodge will take on the 0.75 mile oval track Sunday at 7 p.m.  A Virginia native, Elliott has had one top-10 finish in his 18 Richmond starts, which came in the spring 2005 when he placed seventh. After spending 75% of last week’s ‘Dega race in the top-15, Elliott and the No. 19 Garmin/Best Buy team finished 29th after being involved in the multi-car accident on the final lap of the event. This weekend, Elliott will jump into the same car used at Phoenix just weeks ago, and says they’re hoping to show everyone what they can do with it at Richmond.

Elliott agrees that this weekend will be more intense being in his home state, and says, "I used to sit in those very same stands when I was a kid with my family members. A lot of my crew guys are from Virgina, too, so it means a little more to all of us when we race at Richmond."

The post Richmond plays home state to Sadler and No. 19 appeared first on Garmin Blog.