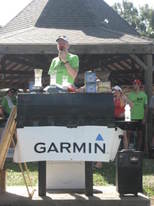 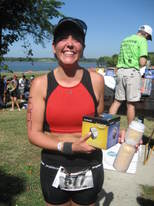 Besides the personal satisfaction gained from completing a triathlon, many women were rewarded with some pretty schwank door prizes following the KC Women’s Tri, including several Garmin fitness devices and cycling jerseys. Pictured here is Jody, who won a Forerunner 205. We also presented the overall winner with a Forerunner 305 Multisport. Watch her kiss her old PR goodbye now that she has the absolute best multisport training tool. The 305 goes from wrist to bike in seconds thanks to the included quick-release mounts. See it in action here. 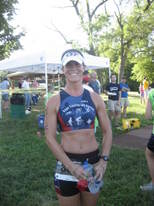 The second-place finisher, Erin Glenn from Phoenix, Arizona, has been using the Forerunner 201 for three years. Erin said she loves the Forerunner and has used it in training for numerous events, including Ironman Arizona 2006. When I asked Erin if she had plans to do another Ironman, she said she’s taking a little time off but hopes to do one again soon. Erin, who’s a manager for Pottery Barn Kids, had a whole slew of supporters there for her Saturday. She said her family members from the KC area planned a family reunion around this race. 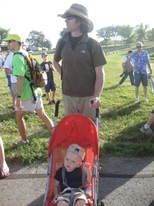 Support of family and friends was a common theme for many of the triathletes on Saturday. I saw lots of proud spouses toting cameras, kids and signs. The heat didn’t sway these staunch supporters. In fact, the finish line area was constantly clogged with supporters lined up to get a peek at a wife or mom making her triumphant sprint to the finish. Volunteers were there to give the finishers a cool bottle of water and a rose, all donated by Hy-Vee.

The KC Women’s Tri supports women and children in other ways via the race’s three charitable partners. A portion of the race proceeds will go to help each of these organizations. The charitable partners for this year’s race are WIN for KC, Girls on the Run and the Rose Brooks Center.

"Many people had a part in making the race successful, including my assistant race directors, organizing committee, race-day volunteers, radio operators, motorcycle drivers, first aid personnel, and Clay and Clinton County Sheriff’s deputies," Clay said. "Our sponsors also played a huge role in bringing the event to life. Garmin is a fantastic presenting partner that goes above and beyond what we ask. The Trek Bicycle Store of Kansas City provided excellent race-day support and mechanical expertise. Hammer Nutrition keeps our athletes fueled and hydrated. And World Multisport provides us with excellent technical and logistical support. Without any one of these partners, the race wouldn’t be as successful as it is.