To meet and work with an exceptional athlete is a privilege and one of the job perks I most enjoy. To meet an exceptional athlete with humility that belies his true talents is even more of a thrill. Terry is the latter. In fact, I had to work at it a bit to extract some of these details of his running resume. But it’s a story worth sharing, so here it is … 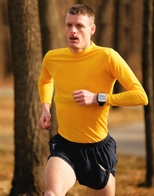 I started running at age 12 back in Ohio. Thirty miles a week — 3 miles to school and 3 miles home every day. When I got to high school, I upped my mileage to 60 miles a week. I ran all through high school and landed a scholarship to college. During college I consistently ran about 80 miles a week. I went to college for 2 years, then took a break and went to live in Georgia to watch the Atlanta Olympics and train with some Olympic hopefuls. Next, I went down to the Virgin Islands to hang out and did a bunch of training with some Olympic level triathletes. Realizing that I wasn’t good enough to be a professional, I went back to college where I was 13th and 6th at nationals in cross country my junior and senior years.

After college I began training with my good friend, Dmitry. We were training 2x a day, running 100+ mile weeks for 6 months while he was preparing for the 2000 Olympics. I decided then that I’d accompany him to Russia to his Olympic training camps so that I could try to attain an Olympic marathon qualifying time. While there I met my eventual wife, who a few years later moved to the U.S. Once she came, I limited my running, got a job and ran smaller hometown races. I’d usually pick marathons where I had family so I could get a vacation and a race. I kept to smaller marathons so I could win without training. Then I began coaching at Mid-America Nazarene University, where I was an assistant coach for 3 years. Since I’m not training anymore, my typical day is filled with about 3 hours of some sort of cycling or running. One of these days, I’ll get motivated and try the Ironman or perhaps set a time goal to strive for in the marathon.

Terry’s most recent win was the Hampshire 100, a trail race in Vermont. This was Terry’s first “ultra” and in his own words, he “wimped out” and did the 50k distance. That’s 31 point some odd miles … only the course was extended to 37 miles and Terrible Terry, a newbie at any distance beyond 26.2, covered the challenging course in just under 5 hours.

These days, Terry’s finding fulfillment beyond the trails in his work for The College Board, where he trains teachers to use software and teaching tools associated with advanced placement classes in high schools. “I think what sets my company apart from other content providing companies is that we’re not simply trying to teach them to pass the test,” Terry said. “We’re trying to give students the knowledge and skills they’ll need to make them successful in college and in life. In gaining that, they automatically do better on the test.”

Hats off to Terrible Terry and the multitudes of folks who’ll be aiming for their own personal record or other fitness goal for 2008.