Last week’s NASCAR NEXTEL Cup Series events shaped up nicely for Garmin sponsored No. 66 Haas CNC Racing / Best Buy driver Jeff Green who finished in 19th place after a 32nd-place start at Pocono. "It was a pretty good day," Jeff said. "If you look at it based on how we’ve finished the past four or five weeks, it was a very good day." With this finish, Jeff moved up to the 29th position in the NASCAR NEXTEL Cup drivers points standings. This weekend, Jeff and team aim for another top-20 finish while they take on the 2.45-mile road course of Watkins Glen International. Jeff says that although a road course is a whole different animal than an oval, he enjoys the challenge. At Jeff’s most recent run around the Watkins Glen road course last August, Jeff finished 15th-place. We wish Jeff and team the very best as they take on the 90-lap road course this Sunday! 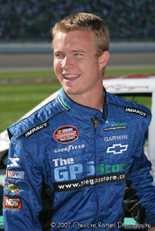 In other NASCAR news, Craftsman Truck Series No. 08 theGPSstore.com / Garmin driver Chad McCumbee had last weekend to rest up. After Chad’s last event at O’Reily Raceway Park just two weeks ago, his 34th-place finish wasn’t what the team had hoped for. This weekend Chad and team head the Nashville Superspeedway for the Toyota 150 where Chad says they’ve had good runs in the past. "We can put this unfortunate luck behind us and focus on getting theGPSstore.com / Garmin truck in victory lane there." We wish all the luck for Chad and team tomorrow, too, and hope you’ll join us in cheering both drivers on to victory!