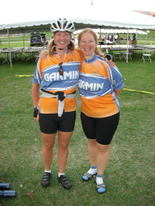 Several associates from Garmin, along with local cyclists and members of the Olathe YMCA, trained together through the summer months. They joined forces with one of the largest cycling teams represented at the Missouri ride – Copaxone. Copaxone is a drug for the treatment of MS, developed by Teva Pharmaceutical Industries, Ltd.

Though the weekend weather forecasts threatened rain, the skies held back so that the 2,000-some riders experienced only a little sogginess early on Saturday and later that night after the ride. On Sunday, just after some from the Garmin group had packed up their gear to head home, the rains came. Doubtful a downpour could’ve damped the spirits of these cyclists, however. See the pics for yourself. 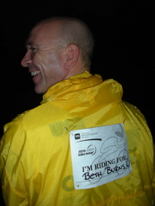 One Garmin rider who did the MS 150 for the first time said he’s already planning to sign up for 2007. Though his longest training ride was under 55 miles, he had no problem completing the ride, which was roughly 90 miles the first day, 60 miles the next. He said he discovered the huge benefit of drafting for the first time in this race. “When a pack of faster riders came up in front of me, I joined up behind and it was amazing what a difference it made to cut the headwind.” This marathoner/triathlete/cyclist used the Garmin Forerunner 205 to track his ride data.

Another Garmin rider used her Edge 305 to see it all – speed, cadence, distance, time, heart rate, even elevation data such as percent grade. “There were some pretty nasty hills out there, and just seeing the data gave you a good picture of your ride effort. It’s also great to see lots of data on one screen so it’s truly hands-free.”

Speaking of crunching data, a couple of the riders from Team Copaxone uploaded their ride data from the Edge to MotionBased.com. Click on the links below to view their route map and ride metrics, with everything from speed on ascent/descent, heart rate data broken out by zone, even reported weather conditions for the area, including temp and wind speed. 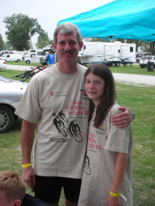 There was even a father/daughter duo on the Copaxone team who rode a tandem bike. One recurring comment from the folks who did the MS 150 ride this year was “I’m signing up for next year.” To join in the fun and help a good cause at the same time, go to the link below and click on “find an MS bike tour.”
http://www.nationalmssociety.org/MS%20Bike%20Tour.asp

If you made it to the finish line in this post, here’s a special little movie to show you what goes on after riding 100+ miles with fellow team members pointing a camera at another rider’s face.
Download DSCF2107.AVI