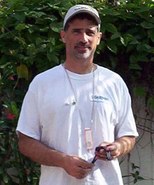 Back in the early 90s, the Proclaimers made it cool to want to walk 500 miles. This year, Theo Karantsalis plans to double that distance. Theo, a Miami area librarian who doesn’t let his multiple sclerosis slow him down, says, "I am walking 1,000 miles to help raise awareness of the ADA Restoration Act of 2007…. It’s important that we restore protections for people living with MS and other disabilities."

Theo is already more than halfway to his goal, and his Garmin Forerunner 305 has been there with him, ready to track his time, distance, pace and heart rate. So why 1,000 miles? That’s about the distance from Miami to Washington D.C., and "that is where I would like to walk to in order to raise the most awareness for this legislation." And in the process, he has shed more than 50 pounds! You can track Theo’s progress on his Web site.