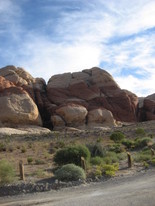 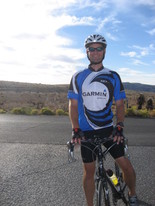 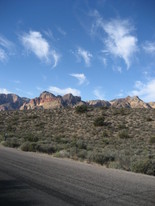 We couldn’t have asked for a better day for the touring ride through Red Rock Canyon. Blue skies and temps in the 70s made for a great ride, though 11+ miles of climbing made this flatlander long for my third gear ring. Check out the ride in the MotionBased map player. Apparently, I inadvertently stopped the timer on my Edge 305 about 7 miles from the finish of the ride, but the Edge 705 that was mounted to my bike recorded our distance as 26.56 miles. As soon as we finished our ride, the guys from Cannondale got set for the next wave of riders to come in for a demo. Cannondale has a team of mechanics and team riders who travel the country with their demo trucks, packed to the gills with bikes in all styles and size, ready for cyclists to “try, then decide”. Check their site for tour stops near you.

Later, I headed back to the convention center for the product show. The Garmin booth got tons of traffic on all days of the show. Lots of folks interested in hearing about how the Edge 705 can interface with compatible power meters, like SRM and Quarq. Now, cyclists who want to get the most from their training can see their power output along with heart rate, cadence, speed, elevation and GPS position—all on one screen. What’s power bring to the picture? Basically, it measures a cyclist’s true performance independent of outside factors like wind and terrain. Two reps from SRM were in our booth to talk about the interface and let folks give it a whirl for themselves. Check out Peg’s power.