Sixty five years is a long time for some, but for the crew of one United States Army/Air Force Squadron, it probably seems like yesterday. After departing on a World War II mission to support U.S. allies in war-torn European ground almost 65 years ago, this Saturday, June 27, will bring closure to a mission that was never completed. Due to insurmountable weather-related problems the entire squadron of six P-38s and two B-17 Bombers was forced to abort their mission and make an emergency landing in Greenland during Operation Bolero. 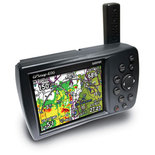 On Saturday, the now named "Glacier Girl," for its years in the ice, will make a recovery/restoration mission that after 10 years in the making, has cost over a million dollars. Said to remain as challenging as it is historic,"Glacier Girl" will be accompanied by a vintage WWII US war bird P-51 Mustang "Miss Velma," during Operation Bolero II.

Also worth mentioning in addition to this historic event, is that while in the air, the mission crews will be using portable handheld Garmin GPSMAP 296, 396 and 496, to help them not only arrive safely, but to also complete a piece of history while honoring the brave crew of Operation Bolero.

To experience this Garmin integrated historic flight as it happens, visit AirShowBuzz.com.