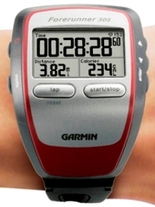 Garmin has football fever – or soccer, as it’s known in the States – and some of the best players in Europe are going to benefit from our GPS technology.

Today, we announced that we are going to be the principal sponsor for Middlesbrough Football Club of the English Premier League (home of Manchester United, where David Beckham started his career). Players will wear the Forerunner when they’re practicing and working out, and coaches and fans alike will have the chance to scrutinize the data — heart rate, speed and distance covered — through Garmin’s Web-based training software. Not only will this help the athletes be more efficient in their exercise, it will hold them accountable to their staffs and loyal fanbase. (This is taking fantasy football to a whole new level…)

The team will be wearing Garmin insignia on their uniforms (or kits, as they’re known over there), and Middlesbrough even plans to use Garmin’s automotive devices to help get them to and from their away games. We think this sounds like a perfect reason for an overseas tailgate … er, research trip.