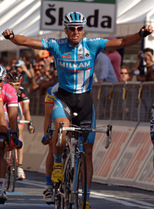 The pro cycling world has all eyes on Italy right now for the 21-stage Giro d’Italia. Want to catch the action from some cyclists who have an Edge? Check out the stats for Team Milram, which has uploaded the first 13 stages to MotionBased. Their performance has been impressive, with Milram’s Alessandro Petacchi winning stages 3, 7 and 11. The pic here shows him winning stage 3. From their MotionBased digest, you can view detailed stats about their ride along with comments about that stage. Check out the summary of stage 7. At 156 miles, it’s the longest stage, and rider Sergio Ghisalberti did at an average speed of 24.9 mph, 55.6 max! More coverage to come as the riders head toward a June 3 finish.