0
Home Garmin Blog Eager Cyclists on Edge of Their Seats

Eager Cyclists on Edge of Their Seats 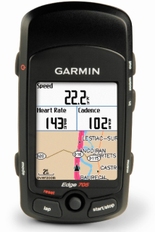 Cyclists of every genre will convene this week at Sea Otter Classic in California, many of them with Edges strapped to their bars. And as the Edge 705 and Edge 605 make their way onto store shelves and bicycles around the world, positive reviews have been pouring in. The latest comes from bikeradar.com, which starts off by saying straight out, "The Garmin Edge 705 has been probably the most eagerly anticipated new widget of the last six months among bike-riding gadget fans."

Other highlights: "Key features for bike riders include the ability to plan, upload and follow a route; record a route and download it to a computer; and to set a destination and get directions as you ride."

"There’s a lot to absorb to get beyond the basics of the Edge 705 … but Garmin has done a great job of keeping things clear and easy to find." And finally, "The workout function lets you, for example, set a time and distance for a ride, or specific portions of it, and see how you are doing against your target, which should appeal to time trialists."

The post Eager Cyclists on Edge of Their Seats appeared first on Garmin Blog.