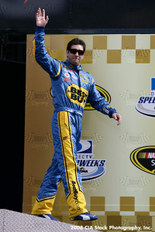 Ladies and gentlemen, start your engines… because we’re happy to announce that Garmin will be sponsoring the Gillett Evernham Motorsports team and the No. 19 car in the 2008 NASCAR Sprint Cup Series. We’ve teamed up with Best Buy Racing, and are looking forward to spending a lot of time in victory lane with driver Elliott Sadler. Elliott is a racing fan favorite and Garmin enthusiast and the Garmin family is excited to be on board with him in the drivers seat.

At the start of the season, Elliott and the No. 19 car took home a 6th-place finish in Daytona, and after last week’s race in California, Elliott is 13th in drivers points standings. The No. 19 team heads to the city that never sleeps this weekend for the UAW-Dodge 400 where drivers will take on the 1.5-mile superspeedway of the Las Vegas Motor Speedway. Watch Elliott burn up the track this Sunday as the team debuts the Stanley Tool paint scheme with red, yellow and orange flames on the black car background. This brand new car has only been tested in Las Vegas in January. Catch the action on Sunday, starting at 3:30 on Fox.

And keep it locked here every Friday for a race re-cap and a look ahead to that weekend’s event. Good luck, Elliott!