Celebrating fitness: It’s worth a tri!

The swim was incredible. I got out quickly and had it not been for a buoy I couldn’t see, I would have been completely alone off the front. I still lead the whole swim and for the first time in my pro career, I had the fastest swim coming out of the water first. It was such an amazing feeling to know that everyone was chasing me! I had a quick T1 and was off on to the bumpy, hilly and windy bike course. I rode solo for about 20k before being caught by a small group of women. We came off together into T2 and I was 2nd out on to the run course. Then my luck changed. I got a nasty side stitch about 1.5k into the run. I tried to get it to settle down using every trick I know, but each time I tried, it just got worse. I struggled, in a lot of pain, walking and running, for another 6.5k before calling it a day.

It was, and still is, a massive disappointment to me because I had put myself in such an amazing position up to that point. But, analyzing the race I am so proud of my swim and bike and can walk away feeling even more confident in my fitness and ability heading into my first World Cup in Japan on April 13th. The pieces are all there. I just need to put them together.

Until April, it is back to a lot of hard training and preparation to have the breakout race I’m due for! 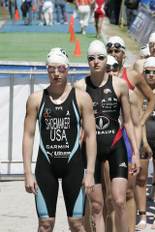 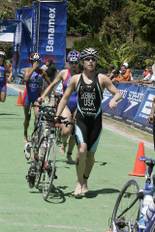 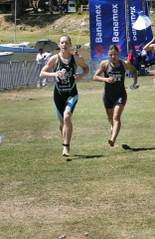 The post Celebrating fitness: It’s worth a tri! appeared first on Garmin Blog.