0
Home Garmin Blog Behind the scenes for Garmin TV, part 4

Behind the scenes for Garmin TV, part 4

Staying dry on an outdoor film shoot can be a challenge, but the crew on this set had plenty of ways to work around the weather. In the first pic, they’re moving a giant rain tent that protected the car, actors, camera and other equipment during parts of the shoot. Second pic shows our actors Kaiji Tang and Jolene Babko staying dry between shots. 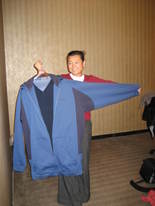 Meet the producers. Producer Karen Chen with Alturas Redfish Films always seemed to have a smile and an answer for any situation that arose. Wouldn’t she look great in this "size Yao" warm-up suit? Middle photo shows Garmin’s producer, Patti Hirst, intently watching the monitors and recording favorite takes during the shoot. Behind her is our creative director, TK, and our still photographer, Scott Hepler, who was there to capture photos throughout the day. Next photo was taken later in our shoot with director of photography Don Davis, director Phil Boston and visual effects artists Craig and John from Zoic Studios, sizing things up from the monitor.

Here, actors Kaiji and Jolene take a short break between scenes. If anything, the crummy weather helped these two get into character that much easier. The setup for this commercial calls for a little in-car tension like many have experienced when traveling with a spouse or significant other. Jolene, repped by Central Artists, has done some commerical and TV work and pulled off her role for this spot flawlessly. Kaiji also did a bang-up job in his performance. He’s repped by Kolstein Talent Agency. Kaiji is currently working a 13-episode pilot for Anime TV, which will be premiering in February. Watch for Kaiji on this show, hosted by Johnny Young  Bosch, where they review Japanese cartoons.

That’s a wrap for now. More magic to come as we edit the spot and the folks from Zoic add visual effects. We’ll keep you posted as to when you can catch the commercial.

The post Behind the scenes for Garmin TV, part 4 appeared first on Garmin Blog.