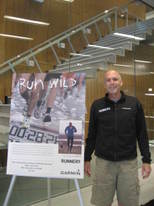 Here’s a guy whose work assignments have sent him running through Hell and back. How else would you classify a 146-mile race through Death Valley in July? Bart has also run in some of the most awe-inspiring locations — Mt. Everest, Egypt, Rome — and some, er, barren ones too, like the Bare Buns Fun Run. Trust me, you don’t wanna see even the censored pics from that adventure. It’s all been part of a very wild career for famed Runner’s World editor and long-time runner Bart Yasso. Bart made a special visit to the Garmin Store in Chicago last Friday and shared his experiences with runners, including some insight to his Yasso 800s workouts. As amazing as Bart’s running career has been, he’s a humble, incredibly personable guy who says the most amazing thing about his adventures have been the people he’s met along the way.

People like Chris H, who’s currently training for the Milwaukee Marathon. Lucky for Chris, he now has a brand new Forerunner 305 to coach him along the way. Chris was the winner of the Foreunner Garmin gave away after the seminar. Stay tuned for video from Bart’s visit as well as highlights from Garmin’s magnificent store on the Magnificent Mile.